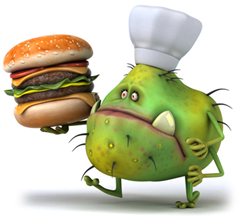 Can Gut Bacteria Make You Fat?

For example, one study (Vijay-Kumar et al, Science, 328: 228-231, 2010) compared a strain of mice that are genetically predisposed to obesity with wild type (genetically lean) mice. They first looked at the intestinal bacteria. It turned out that the obese mice and lean mice had the same differences in intestinal bacteria that obese and lean humans have. And just like obese humans the obese mice ate more, displayed insulin resistance, and had elevated levels of triglycerides, cholesterol and blood sugar (They were pre-diabetic).

The investigators then decided to test the hypothesis that the particular bacterial strains found in the intestines of genetically obese mice might be causing their insulin resistance and obesity.

In the first experiment they killed off the intestinal bacteria in the genetically obese mice by putting high dose antibiotics in their food. Depleting the intestinal bacteria created some health problems for the mice, but it completely prevented the insulin resistance, overeating and obesity normally observed with this strain of mice. 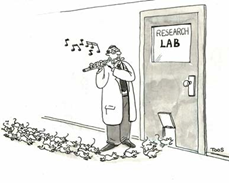 In short, when their guts became colonized with bacteria from obese mice, the genetically lean mice became overweight and developed diabetes. Based on these experiments and other studies the scientists hypothesized that the wrong kinds of intestinal bacteria can make a significant contribution to insulin resistance, which in turn can lead to overeating and obesity. In short, they concluded that bad gut bacteria may make you fat.

The Battle of The Bacteria

But then the investigators asked two really interesting questions:

1) If you mixed the two types of bacteria, which one would win “the battle of the bacteria”?

The results of this experiment were (envelop please): The “lean” bacteria won out. They became the predominant bacteria in the intestines of all of the mice in the cage. Furthermore, none of the mice became obese – even the ones that had originally been inoculated with gut bacteria from obese humans.

2) Are the types of bacteria in the intestine influenced by diet?

In the previous experiment the mice were eating standard mouse chow – which is pretty healthy if you are a mouse. So the investigators decided to ask what would happen if they ate foods that were similar to really good and really bad human diets. They devised two types of diets for the mice – one that was high in fresh fruits & vegetable and low in fat (the good diet) and one that was high in fat and low in fresh fruits and vegetables (the bad diet).

On the good diet, the results were the same as in the previous experiment. On the bad diet the “lean” bacteria never grew in the intestines of the mice inoculated with bacteria from obese humans and those mice went on to become obese.

This study confirmed that the wrong kind of gut bacteria can cause obesity, but it also showed that diet can influence the type of bacteria that can grow in the intestine – something I talked about in an earlier issue of “Health Tips From the Professor”  Our Gut Bacteria Are What We Eat.

1) Does this mean that you should rush out and buy some probiotics (good bacteria) as part of your weight loss strategy? The simple answer is no. That would be premature. These studies were performed in mice. Although similar results have been reported in humans (for example, Jumpertz et al, Am. J. Clin. Nutr., 94: 58-65, 2011), those studies are very preliminary at present. In addition, genetics and diet obviously played a role in the results. In short, we are a long way from knowing to what extent intestinal bacteria might contribute to obesity in humans.

2) However, there are many very good reasons to make sure that you supply friendly bacteria to your intestinal track on a regular basis. For example, we know that bad bacteria in your intestine can compromise your immune system, convert foods that you eat to cancer causing chemicals, and cause chronic inflammation – which contributes to a number of major diseases.  Can gut bacteria make you fat?  We can’t yet say whether good bugs will help keep you slim, but we do know that they can help keep you healthy.

3) Finally, while we can’t yet say whether probiotic supplements can help you lose weight, it is becoming increasing clear that healthy diets (low fat, high fiber diets with lots of fresh fruits and vegetables) support the type of intestinal bacteria that can make you slim. This is yet one more reason why a healthy diet is so important if you want to stay slim and healthy.