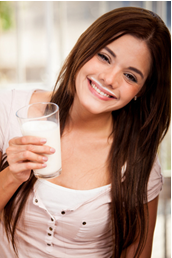 Got Milk? Maybe Not

You’ve probably seen the ads featuring your favorite celebrities sporting a white mustache and saying “Got milk?” Those ads all suggest that milk is essential for strong bones and a healthy body.

And you are probably aware of dietary recommendations from learned experts saying that you should be consuming at least 2-3 servings of milk every day – more if you’re over 65.

If so, you are probably really confused by the recent headlines saying things like: “Milk Consumption May Increase the Risk of Fractures” and “High Consumption of Milk May Increase Mortality Risk”.

Can milk be bad for you?

Before you pour all your milk down the drain and put Bessie the cow out to pasture, we should examine the study behind the headlines.

The results were pretty dramatic. When they compared women who were drinking three or more glasses of milk per day to women who drank less than one glass of milk a day, the highest level of milk consumption was associated with a:

In contrast, consumption of fermented milk products (cheeses, soured milk and yoghurt) was associated with a decreased risk of mortality and bone fracture in women (a 10-15% decrease in risk for every serving consumed).

What Are The Dangers of Drinking Milk?

The authors speculated that that the increased mortality and fracture risk was due to galactose (a sugar formed from lactose, the primary naturally occurring sugar in unfermented milk). Their argument supporting this hypothesis was four fold:

1) In our intestines lactose is split into two sugars, glucose and galactose.

2) In animal models (primarily mice and rats) lifelong consumption of galactose is associated with shortened lifespan caused by, among other things, oxidative damage and chronic inflammation.

3) There is a rare genetic disease called galactosemia in humans that is caused by the lack of a crucial enzyme required to metabolize galactose. Patients with this disease die at a very early age without treatment. Even with dietary restriction of galactose they experience oxidative damage, inflammation and an increased risk for chronic diseases, including osteoporosis.

4) In a subset of patients enrolled in this study, high milk consumption was associated with an increase in blood markers of oxidative stress and inflammation.

While the results seem clear and the hypothesis seems plausible, we should perhaps look at the limitations of the study before making significant dietary changes.

Limitations of the Study

There are a number of significant limitations to this study.

1) It simply measures associations, not cause and effect.

2) The statistics were not entirely consistent. For example, while consumption of three or more glasses of milk (average = 3.4 glasses/day) was associated with 90% increased risk of mortality and cardiovascular mortality in women, there was only a 15% increase in risk associated with every glass of milk consumed. 15%/glass times 3.4 glasses/day = 51% – not 90%. A little bit of higher math tell us that these numbers don’t quite add up.

4) The galactose hypothesis is interesting, but far from convincing. Mice and rats don’t necessarily metabolize galactose in the same way as humans. Furthermore, in humans galactosemia is a very rare disease, and there is currently no evidence that dietary galactose poses a problem for people without the genetic defect that causes galactosemia.

5) Most importantly, there have been a number of previous studies examining the effects of milk consumption on both fracture risk and mortality, and those studies have been remarkably inconsistent. Some show increased risk and others show decreased risk. Meta-analyses of all previous clinical studies have shown no significant association between milk consumption and mortality (American Journal of Clinical Nutrition, 93: 158-171, 2011) or hip fracture (Journal of Bone Mineral Research, 26: 833-839, 2011).

While some of the media articles were characterizing this study as ground-breaking and one that should lead to changes in dietary recommendations, the authors were far more cautious in their interpretation of the data. They said: “The results of this study should be interpreted cautiously given the observational design of our study. The findings merit independent replication before they can be used for dietary recommendations.” I agree.

Where Else Can You Find The Nutrients That Milk Provides?

Since milk provides no proven benefit and may pose some risk many of you may be wondering where else you can get the nutrients that milk provides.

Milk is an excellent source of calcium, magnesium, vitamin D, protein and riboflavin. When you carefully evaluate alternative food sources for these nutrients you will quickly discover that your choices are not straight forward. You need to be a knowledgeable consumer and careful label reader. For example:

• Cheeses are an excellent source of calcium, but many cheeses are high in fat and sodium.

• Yoghurts and other fermented milk products are an excellent source of calcium, but many of them are high in added sugars and artificial ingredients, which I do not recommend (see my article “Do Artificial Colors Cause Hyperactivity?” (https://healthtipsfromtheprofessor.com/do-artificial-colors-cause-hyperactivity/).

• Tofu and tempeh provide only 1/3 to ½ the calcium found in milk and provide no vitamin D.

• “Milk substitutes” made from soy, rice or other sources are often high in added sugars and may not provide the same nutrient profile as real milk. You have to read the labels carefully.

1) A recent study suggested that high milk consumption (> 3 glasses per day) in women might be associated with a:

2) That study has a number of limitations and is not consistent with previous studies. Even the authors of the study stated: “The results [of this study] should be interpreted cautiously…”

5) Since milk provides no proven benefits and might pose some risk, you may be asking where else you can find the nutrients that milk provides. While there are a number of other dietary sources of the calcium needed for strong bones, each of them has potential limitations (for details, see the article above). You have to be a knowledgeable consumer and careful label reader if you are looking for non-milk sources of calcium.