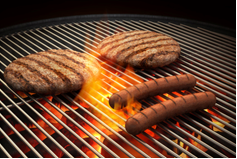 Want Cancer With That Burger?

Its summer and you have most likely already visited a backyard bbq. One question that you probably won’t hear from your host or hostess is “Would you like some cancer with that burger?” But, perhaps that is exactly the question that they should be asking.

This study compared 531 people ages 40-79 who had recently been diagnosed with advanced prostate cancer with 527 matched controls. Both groups were asked about their dietary intake of meats, usual meat cooking methods and doneness of the meat.

The results were quite striking:

However, those percentages are a little bit difficult to compare, because “increased consumption” was defined relative to what the usual consumption or cooking practice was. So put another way, weekly consumption of…

…were associated with a 50% increased risk of advanced prostate cancer.

In contrast, consumption of white meat was not associated with increased cancer risk, no matter what the cooking method was used.

Is It Possible To Enjoy Your Cookouts Without Increasing Cancer Risk?

Our local newspaper recently carried some tips by Dr. Denise Snyder from the Duke University School of Nursing in Durham, NC on how you could reduce the risk of giving your guests cancer the next time you are the chef at your backyard bbq.

Here are her suggestions:

So here’s to a healthier backyard bbq. Bon appétit!

2)     In contrast, consumption of white meat was not associated with increased cancer risk, no matter what the cooking method was used.

3)    I’ve included several tips on how you can reduce the cancer risk associated with grilling red meats in the article above so you can enjoy both your cookouts and your health.