Does Dehydration Make The Pain Worse?

Let’s talk about something really serious – hydration!  Since our body is mostly water, averaging 50-65% of our body weight, hydration is vital for life. The balance between water and electrolytes plays a key in how our systems function, including every cell, organs (heart, liver, etc.), nerves, and muscles.  Even our bones are made up of about 30% water, and our brain is approximately 60% water.

Dehydration has disastrous results! You may experience headaches that become migraines, or even a feeling of brain fog. Your brain tells the other organs when and how to function, so dehydration in the brain will affect your entire body.  Insufficient water may cause your eyes to get heavy, and you may become constipated.  The effects on your heart, lungs, liver, and other vital organs is even worse.

Yet something as simple as sipping water throughout the day can prevent all of this from happening.  It is suggested that men drink 8 glasses of water a day, and women drink 7.5 glasses a day.  Of course, searching the internet will bring up experts who vary widely on the amount of water that is required for good health.

Since I am a muscular therapist, my major concern is how dehydration affects the muscles and our pain levels.  Studies have shown that when there is insufficient water in the body, pain is felt more acutely, including muscle pain, arthritic pain, and joint pains.

What is the Best Water To Drink? 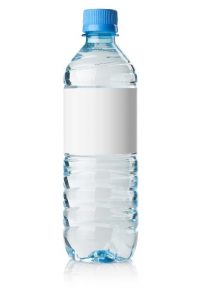 Designer water has become popular in the USA, but are they necessary?  I saw a recent post saying: “If you are paying $3 a bottle for Smart Water, it isn’t working.”

As for specialized water products, Steve Chaney, PhD, the author of Slaying the Food Myths and Slaying the Supplement Myths, has stated that products such as ionized water and alkaline water “win the Flying Pig award” from a complicated chemical point of view.  It’s way beyond the scope of this newsletter to explain his rationalization, but if you’re interested you can find his books on Amazon and read the full explanation (and a whole lot more!).

The bottom line, according to Dr. Chaney, is to just drink pure water, preferably water that doesn’t have chemicals added for various reasons.

William W. Li, MD, the author of Eat to Beat Disease, also recommends avoiding water that is stored in plastic bottles, even bottles without BPA plastic.  Plastic particles called microplastics will shed into the water. One study (https://orbmedia.org/sites/default/files/FinalBottledWaterReport.pdf) found as many as 2,400 pieces of microplastic in eight fluid ounces of bottled water.

To protect yourself from this problem, I suggest you get a stainless-steel water bottle, and if you like to use a straw you can get stainless steel straws on Amazon.  That solves the problem and also helps the ocean since so many bottles end up floating in rivers, streams, and the ocean. 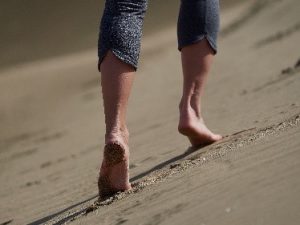 I’ve spoken about hip pain and the muscles that cause it several times in the past.  Basically, the muscles that insert into your hip bone (pelvis) and into your thigh bone (Rectus Femoris, Gluteus Maximus/Medius/Minimus, and Tensor Fascia Lata) get tight and pull up on your leg. This upsets the alignment of your hip, and you have pain.

Recently I discovered yet another reason, one I’d never considered before, yet I’ve now seen it in several clients. It’s a bit complicated so I’ll go slow so you can visualize what I’m describing.

A client of mine had LEFT hip pain.  When he would come in, I would work on his left hip and he would have temporary relief.  I’m not used to people only having “temporary” relief, so I was going over and over in my mind what could be happening. Then he gave me a clue that really made sense.

This picture above is an exaggeration but look at how the walker’s right leg is up the slope and left leg is down the slope. You can imagine that his hips are also tilted with the left being lower, but he’s trying to be level (or his body would be tilted to the side – LOL).

Back to my client….remember that his LEFT hip is hurting as he’s walking down the beach with his right leg lower than his left leg. Then he turns around and with left leg now lower than his right leg, he is out of pain.  I contemplated that situation, and suddenly it came to me!  His RIGHT leg was actually the leg that is shorter! 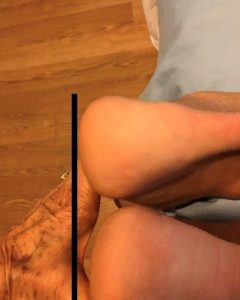 So, I asked him to lie on the massage table with his feet off the end so I could see if one leg was shorter than the other, and sure enough, his right heel was about ¼” higher than his left heel.

That means the muscles that insert into his right leg were tight and pulling up on his thigh bone. 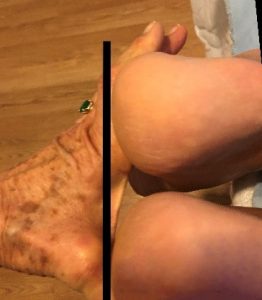 I worked on all the muscles that impact his right hip for most of the session, and for a bit of the time I worked on his left hip muscles.  I have posted all these treatments in prior newsletters, so I won’t repeat them here.

When I was finished, I did another picture, and I was so pleased to see the difference in his leg length. His two heels were now level.

I tested that theory out with other clients this week, and most of the time the shorter leg is the hip that is hurting, but with two other clients, it was the longer leg that was feeling the hip pain. Both times I worked on the hip muscles of the shorter leg, and it worked!

It amazes me that after 31 years of specializing in the treatment of chronic pain, I’m still figuring out new solutions!

Do you stretch?  Most of the time stretching feels good, but sometimes it hurts more after stretching than it 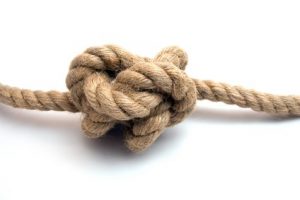 did before.  The reason is the muscles are tied up in knots.

Think of what would happen if you had a 12” length of rope, tied a big knot in it so it’s now only 10” long, and then tried to stretch it back to 12”.  Even if you get it back to the 12” you did it by making the knot tighter and overstretching the fibers on either side of the knot.

That’s what happens in your body when the muscles are shortened by spasms (knots) and you try to stretch the muscle without first releasing the knots in the fibers.

There is a solution! 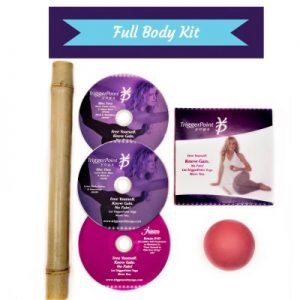 Introducing a safe-stretching kit that has changed names to reflect what it’s doing to help you have more flexibility and mobility.

For only $67.00 you can have all the tools you need to stretch safely and stop pain FAST! 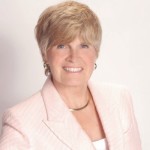