Would You Like Hydrocolloids In Your “Healthy Fast Food?” 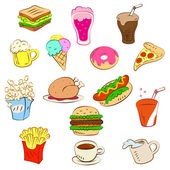 For example, Taco Bell will start using real pepper instead of “black pepper flavor” in its food (I didn’t even realize that there was an artificial pepper flavor. Come on! Real pepper can’t be that expensive!). They also plan to remove Yellow No. 6 from their nacho cheese, Blue No. 2 from their avocado ranch dressing, and carmine from their red tortilla strips.

Are restaurants making healthy fast food? Or is this all for show?

Now let’s look at the bad. Perhaps the first question to ask is: “Why is the fast food industry making these changes? Have they suddenly decided that they want to become part of the health food industry?”

One clue to those questions is the name of the parent company that owns both Pizza Hut and Taco Bell. They call themselves Yum Foods. You will notice that they don’t call themselves Health Foods. Their name alone speaks volumes about their priorities.

When the CEO of Yum Foods was describing these changes, he didn’t speak about any desire to make healthy fast food. He spoke about responding to shifting consumer attitudes and the desire of consumers for “real food” as driving these kinds of changes. The bottom line is that fast food companies are realizing that consumers are becoming more aware of the dangers of artificial ingredients and are making their buying choices accordingly. The companies simply don’t want to lose market share.

The second question to ask is: “Are these foods actually healthier?” The answer is: “Not really”. None of these companies are talking about removing fat, sugar, salt or calories from their foods. They are more concerned with retaining the “yum” factor than they are in actually making healthy fast food.

Do You Want Hydrocolloids With That Pizza?

Now let’s talk about the ugly. Perhaps the most important questions you should be asking are: “What is behind the curtain?” “What aren’t they telling us about?” The answer is: “You probably don’t want to know.”

For example, I came across an interesting article in a food industry journal. A Spanish company called Premium Ingredients was announcing that they had developed a new “food” product from hydrocolloids and melting salts that could be used to replace casein in pizza toppings.

But, first a bit of background:

You’ve heard nutritionists claim that pizza is a perfect food because it contains foods from all four food groups. Of course, that’s ignoring the fact that pizza is generally made with white flour and contains lots of fat – mostly saturated, calories and sodium.

But, when you look at many of the frozen and fast food pizzas on the market it gets even worse.

Instead they are using casein (milk protein) and a chemical smorgasbord to manufacture a cheese “food” with the taste and consistency of cheese.

Cheese is a good source of protein and calcium, and it supplies a lot of other essential nutrients as well – such as vitamin D, vitamin A, vitamin B12, riboflavin, folic acid, magnesium & zinc. Some of the artificial cheeses on the market do supply the calcium found in real cheese, but almost none of them provide the other essential micro-nutrients. But, because the artificial cheeses have been made with casein up to now, we could at least count on them to supply the protein found in real cheese.