We Grow What We Eat 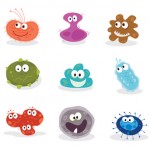 The subtitle of this week’s “Health Tips From the Professor” is “We Grow What We Eat”.

No, this is not about each of us starting a backyard garden and literally growing what we eat – although that would probably be a good idea for most of us. I’m actually talking about the bacteria that we “grow” in our intestine.

Most of you probably already know about the concept of “good” and “bad” intestinal bacteria.

Evidence suggests that the “bad” bacteria and yeast in our intestine can cause all sorts of adverse health effects:

The “good bacteria” are thought to crowd out the “bad” bacteria and prevent many of the health problems they cause.

In case you’re thinking that it seems a bit far-fetched to think that our intestinal bacteria could affect our health, let me remind you that we have about 100 trillion bacteria in our intestine compared to about 10 trillion cells in our body. They outnumber us 10 to 1.

Our Gut Bacteria Are What We Eat

I’m going to get a bit technical here (Don’t worry. There won’t be a quiz). Scientists refer to the population of bacteria in our intestines as our “microbiome”. Previous studies have shown that people from all over the world tend to have one of two distinct microbiomes (populations of bacteria) in their intestines – Bacteroides or Prevotella. [Again, don’t let the specialized scientific terminology scare you. These are just the names scientists have given to these two distinctive populations of intestinal bacteria].

What this study showed was that people who habitually consumed high-fat/low-fiber diets (diets containing predominantly animal protein and saturated fats) tended to have the Bacteroides bacteria in their intestine, while people who habitually consumed low-fat/high-fiber diets (diets that are primarily plant based and are high in carbohydrate and low in meat and dairy) tended to have the Prevotella bacteria in their intestine. And surprisingly this appears to be independent of sex, weight and nationality.

The research defining these two distinct microbiomes (populations of intestinal bacteria) and showing that they are influenced by what we eat is very new. At this point in time we know relatively little about the health benefits and risks associated with the Bacteroides and Prevotella microbiomes.

However, now that do we know that we “grow what we eat” there are numerous studies ongoing to define the benefits and risks associated with each type of bacterial population.

For example, I shared a study with you recently which shows that the intestinal bacteria in people who eat a lot of animal protein convert carnitine (which is also found in meat) to a compound called TMAO, which may increase the risk of heart attacks, and that the conversion of carnitine to TMAO does not occur in people who consume a vegetarian diet ( see “Does Carnitine Increase Heart Disease Risk”)

Most of the studies I report on are ones that you can act on right away. This one is different. This study introduces a whole new concept – one that raises as many questions as it answers. This makes us ask those “what if” questions.

1)     Previous studies have shown that most people have one of two different kinds of microbiomes (populations of bacteria) in their intestines. This study showed that diets high in animal protein and fat favored one kind of intestinal microbiome, while diets low in fat and high in fiber from fruits & vegetables favored another type of intestinal microbiome.

2)     With a few exceptions we don’t know yet how important a role these intestinal microbiomes play in determining the health consequences of different diets. However, because our intestinal bacteria outnumber the cells in our body by 10:1, it is tempting to ask “What if?”

3)     We also don’t yet know the extent to which probiotics (either from foods or supplements) can overcome the effects of a bad diet on our intestinal microbiome, but it is tempting to ask “What if?”