Yoga Shouldn’t Cause You Pain 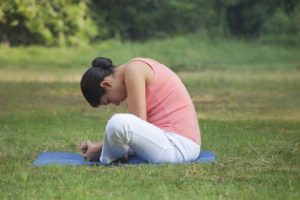 Do you love to practice yoga?  Do you feel energized after stretching your muscles?  Or do you have yoga pain that prevents you from moving easily after your session is complete.  You probably would like to know how to achieve yoga pain relief from tight muscles.

Why Tight Muscles Cause Yoga Pain

A muscle originates on a bone, merges into a tendon, crosses over a joint, and inserts into another bone. When the muscle contracts it pulls on the tendon, and the joint moves.  However, if the muscle is strained either by repetitive use, or trauma, it becomes too short.  Now you will feel pain when you try to lengthen it to its normal length.  If you try to stretch it you’ll feel even worse pain, and you won’t be able to move properly. 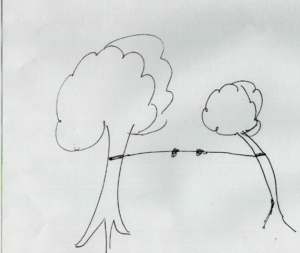 This is what happens in your body when a muscle is shortened by spasms (knots).  And in your body, the two ends are attached to a bone. As a result, when you try to stretch the knotted muscles, they put a strain on your joint.  You feel pain, and you may have even injured your muscles.

It makes sense to untie the spasms before you stretch.  This would help prevent the need for yoga pain relief.

How To Prevent Yoga Pain By Releasing Muscle Spasms First 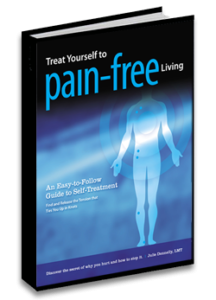 For over 15 years I have been helping people around the world via email and Zoom consultations.  A person orders a consultation, sends me an email explaining the problem, and I send back some treatment ideas. Along with the consultation they get a copy of Treat Yourself To Pain-Free Living  so they can do the treatments I suggest.

An amazing yoga instructor in Texas, named Ana, was having pain in her calf muscles. She was accustomed to yoga eliminating all pains, so she was frustrated that the pain didn’t disappear.  She found me by doing an internet search and decided to have a telephone consultation.

Ana sent an email to me describing her problem.  I told her to order the Treat Yourself To Pain-Free Living book and described the self-treatment for her calf pain.  We then made an appointment to talk in two weeks. 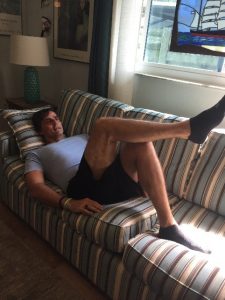 The treatment for the pain in her calf muscles is shown on the left. You lie on your back and put your calf over top of your opposite bent knee.  Press down and slowly move your leg up toward your head so your knee moves down your calf.  If you find a sore point, that’s a spasm. Hold your pressure on the point for about 30 seconds, then release the pressure for about 30 seconds.  Then repeat 1-2 more times.  It will hurt, but since it’s releasing the spasm, you’ll find it will hurt less each time you do it.

It took Ana just two days to resolve her calf issue and get yoga pain relief. By then, her book had arrived. Since she still had 12 days before we talked, she decided to use the information in the book and work on her hips.  She was shocked to find her hips actually had a lot of spasms.  She treated them as the book showed, and her yoga improved.  Then she took a look at her shoulders that were also “fine.”  Again, she was shocked to find they also had multiple spasms. She treated them as shown in the book, and again her yoga improved.  She was thrilled! 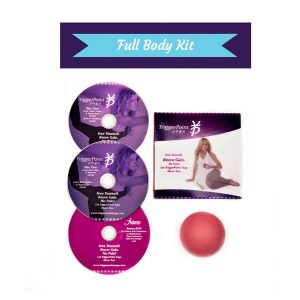 When we finally spoke, Ana had made the decision that this was information that needed to come out to yoga instructors everywhere.  That was the beginning of Trigger Point Yoga.  Ana and I worked together to create a product to teach how to release tight muscles before stretching.

Ultimately the product name was changed to Focused Flexibility Training so athletes would also release muscles before stretching.

It’s important to release the spasms that tie your muscles into knots before you stretch.  Focused Flexibility Training shows you where to press, and how to best treat the knot.  And the yoga stretching DVDs are truly first-class.